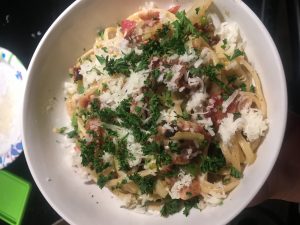 So this recipe has been a recent discovery. I found it a couple of years ago in one of my quick from scratch food and wine cookbooks. I have adapted so that our family could eat it. It was one of my first forays into cooking with leeks and I must say – they are quite tasty! I will definitely be cooking with them again.

I used bacon in my recipe but you could also use pancetta or probably even prosciutto. If you’ve read my blog before you know my love affair with bacon. I should probably seek some kind of counseling. But as I see it – as long as I can keep running and keep my cholesterol down  – I should get some kind of reward right? Why not bacon?!

Ok. Back to the recipe. This one is fairly easy to make and quite tasty. My 11 year old even liked it but he probably inherited my love for bacon. You could also substitute just about any type of pasta. But I like the thickness of the linguine, I think it holds the sauce well since it’s a non-traditional sauce.

Pasta water from cooking the linguine

Put on a pot of salted water to boil for your linguine. In a large skillet, fry the bacon until it is done and let it drain on paper towels. 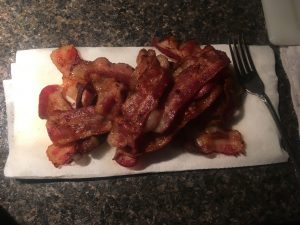 While the bacon is cooking, go ahead and prepare the leeks. You will only need the base of the leeks, so cut off the green stalks and add them to your compost pile. 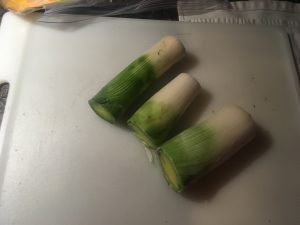 Next, just slice them thinly  they will look like little rings. The best way to clean them is to fill a large mixing bowl with water and add the leeks. Rinse them around with your fingers and then let the bowl sit for about 5 minutes. The silt and dirt will sink to the bottom while the leeks float on the top. Then you can skim the top to get the leeks out. I usually transfer mine to some paper towel to get the excess water off before adding them to my pan. 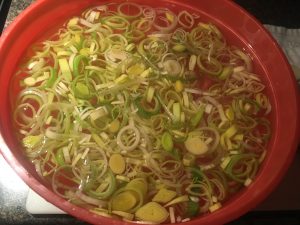 Okay, by this point your bacon should be finished cooking. You need to save 2 tablespoons of the bacon grease in the skillet. While the pan is still hot, add the leeks, thyme, red pepper flakes and 1/4 teaspoon of salt to the bacon grease in your pan. Now is also probably a good time to add the linguine to the pot of boiling water. 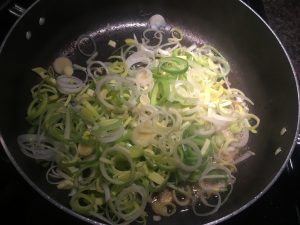 Cook the leeks until they are brown, about 10 minutes. 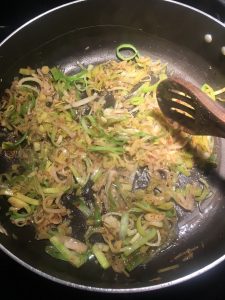 At this point your pasta should be done. Remember to save 1 cup of pasta water. Go ahead and chop the bacon and add it, the leeks and the linguine to the skillet.

Toss it with 3/4 cup of the pasta water, parsley, remaining salt, pepper, and cheese. If it is too thick, you can add more pasta water. If you have someone with a dairy allergy, this is where you can omit the cheese or save it and add it after you have removed their portion. 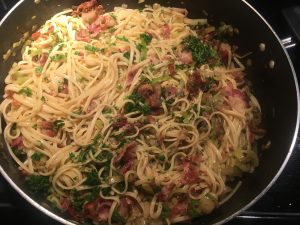 I like to serve mine with a little of the chopped parsley and some soft goat cheese crumbles sprinkled on top.